Stag’s Leap Wine Cellars (SLWC) became one of the premiere California wineries after its 1973 Cabernet Sauvignon took home top honors at the 1976 Judgement of Paris in its respective category. This prestigious recognition put America on the international wine map. For nearly two decades Stag’s Leap enjoyed a tremendous following and accolades from critics and consumers alike.

In the early 2000’s SLWC faced quality issues in the cellar that left a bitter taste on many palates.  After a challenging few years, cellar upgrades and new ownership in 2007, Stag’s Leap is making quite a come back. Wine Spectator’s James Laub profiles the evolution of Stag’s Leap in this article from 2012 and discusses how an unflattering yeast spoiled many past vintages. 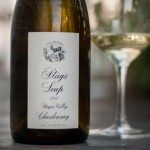 Long Renowned for its robust and elegant Cabs, SLWC also produces cool climate Chardonnays worthy of a place at your next dinner party. After an austere vintage in 2011, the 2012 vintage was deemed outstanding by the Wine Institute.

The 2012 Stag’s Leap Chardonnay has robust notes of lemon curd, granny smith apple, crisp pear, white peach and a touch of pineapple with a hint of salinity on the nose. The vibrant citrus flavors coupled with the bright acidity provide a beautiful foil for luscious lobster or decadent crab meat. The mouthful has a medium weight with a medium long finish thanks to the lees aging and subtle oak aging.